Typically, we would expect to see a rise in the number of applications submitted in October, following the quieter summer period through August and which often extends into September.

However, this year continues to surprise us as October saw a drop in the volume of planning application submissions – both compared to October 2020 and compared to the previous month of September 2021. 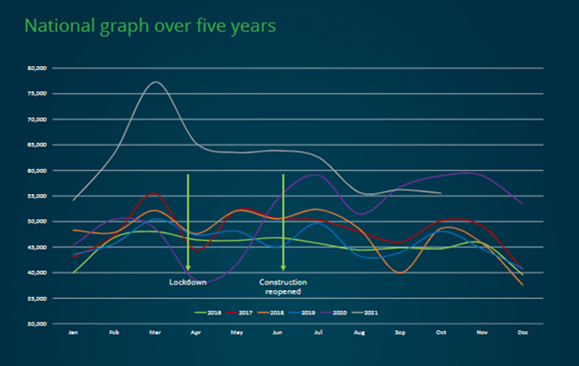 The national graph represents the number of online planning applications via the Planning Portal each month since the beginning of 2016, with seasonal patterns often being similar year-on-year.

This is highly unusual, but not unprecedented, as it was also seen in 2016. It does, however, further reinforce the turbulence of the current market as it continues to settle back to more normal levels following the enormous surge in applications between June 2020 and April 2021. 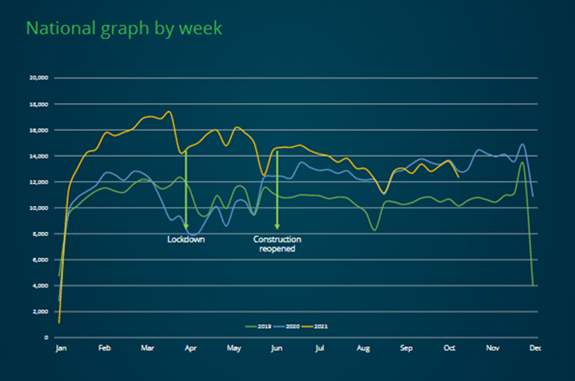 It seems likely that the usual pattern will continue to be disrupted in the last two months of the year – normally applications rise in November and December remains very busy for the first couple of weeks before the Christmas lull.

It is however extremely positive to note that the total number of applications submitted in so far this year (to the end of October) is only 350 fewer than were submitted in the whole of 2020.

This analysis is part of the Planning Portal Planning Market Insight Report. The Planning Market Insight Report is the earliest source of planning market data available, and each issue features key high-level statistics as well as deeper analysis of a specific sector or topic. To see the full details of this analysis, you can access the full report here. You can also sign up to receive the report directly to your inbox each month.