With the most recent local government reorganisation taking place in Northamptonshire, this month we are taking a closer look at the East Midlands. The East Midlands includes the historic and geographic counties of Lincolnshire, Northamptonshire, Derbyshire, Nottinghamshire, Leicestershire, and Rutland. Throughout 2021, the region has continued to achieve good growth in the number of applications and has received an additional 3,883 applications compared to the first three months of 2020, an increase of 40%. 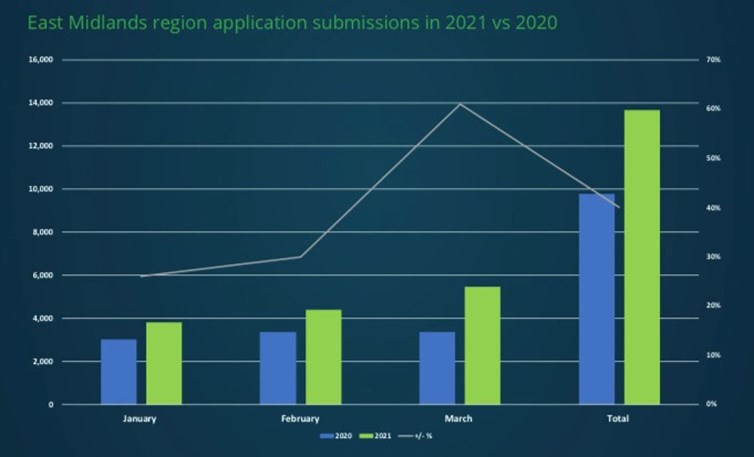 Earlier this month, on 1 April 2021, the non-metropolitan county of Northamptonshire and its seven districts was abolished, and two new unitary authorities created:

We have made changes to the Planning Portal service to reflect this, but will it make them two of the largest authorities in terms of the number of planning applications they receive?

The East Midlands region includes 46 authorities of different types across the counties that has reduced to 40 from 1st April following the local government review.

On looking at the statistics for March, Derby City Council, Rushcliffe Borough Council and Blaby District Council have seen their submissions almost double with percentage increases of 94%, 93% and 91% respectively. West Lindsey District Council on the other hand is the only authority in the Top 20 to receive a single figure increase with 6%.

Reviewing the Top 20 East Midlands authorities by submissions in Q1 2021, we can see how the positive recovery and growth is distributed across the authorities with some very big increases being realised. It is only Bassetlaw District Council that has incurred a single negative percentage this year, with February submissions down by 23 applications compared to 2020. There are also a couple of other single figure percentage increases in January but it is encouraging that a high-level of activity has been achieved.

For the authorities outside of the Top 20 excluding Counties, the submission figures are representative of the table shown and on three occasions three different authorities achieve over a 100% increase when compared to the same month in the previous year.

The above article has been provided to us by the Planning Portal.